We are currently in a period of transition where the recast of the Renewable Energy Directive (RED II) is being implemented by Member States including clear provisions on the issuing of Guarantees of Origin (GO) for gas consumer disclosure. However, at national level only a limited number of registries has been appointed as “competent bodies” under Article 19 RED II who can therefore issue GO according to the directive.

Instead ERGaR has adopted the term CoO, to enable documentation of renewable gas injections, that may hold the same information as a GO under Article 19 RED II but may not have been created by a national registry who has been appointed a “competent body”.

The ERGaR CoO Scheme is operated by the European Renewable Gas Registry (ERGaR) aisbl to facilitate the cross-border title transfer (ownership transfer) of Certificates of Origin (CoO) between participating national biomethane registries. The Scheme provides harmonised rules on the issuance of CoOs and a protocol on the business processes for ownership transfer of CoOs from one country to another. In the scope of the Scheme are hydrocarbon gases, hydrogen and biomethane, as well as other renewable gases that have been injected into the natural gas network.

The Scheme is designed to evolve as the market develops and the implementation of RED II takes place across Europe and other European Directives introduce the concept of renewable gas certificates to demonstrate compliance.

Who is the Scheme for?

National registries who are operating with or without a government mandate and may or may not have been appointed by their government as the competent body under RED II.

By joining the Scheme a national biomethane registry is able to provide a large market for its account holders, being all the accounts in the registries of the other National Biomethane Registries participating in the Scheme with the target to reach whole Europe.

The following national registries are approved as System Participants:

The ERGaR CoO Scheme Rules describe the functions of the Scheme and how it operates, including provisions for how the rules can be updated as needed. The Participation Agreement gives the parties a legal basis for the Scheme’s operation and covers topics such as liability, fee payment and confidentiality. The agreement obliges the national registry to follow the Scheme Rules.

The ERGaR CoO is an electronic document that records information about renewable gas certificates in a harmonised manner, while still respecting the individual requirements of different national registries. However, CoOs are defined in accordance with Article 19 of Directive EU 2018/2001 for the issuance of renewable gas GOs. ERGaR is closely following the ongoing revision of the CEN-EN 16325 standard for gas GOs and is committed to ensuring that the ERGaR CoO Scheme is fully compliant as soon as the revised standard is finalised.

Considering that not all System Participants may be mandated as competent body, some CoOs may have the status of a GO according to Article 19 RED II while others may not.

CoOs are primarily designed to meet the demand of consumers for disclosing their use of renewable gas which, depending on the countries and the reporting methodology, may receive various benefits. These benefits are largely related to corporate emissions reporting and statutory uses. In this regard a CoO may also include additional information, for example information of greenhouse gas emission intensity or a Proof of Sustainability issued by a recognised voluntary scheme. 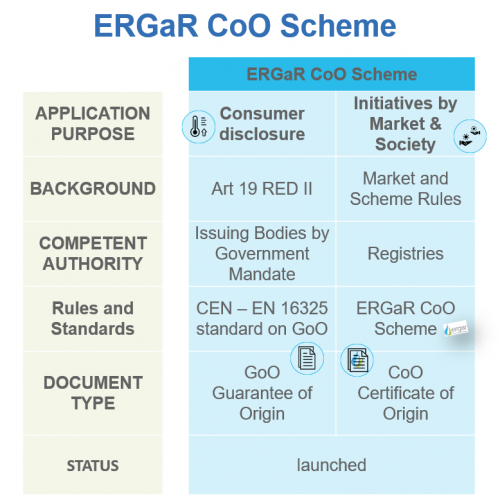 IT- and communication interface

National registries, as System Participants of the ERGaR CoO Scheme, will receive an account in the ExtraVert Platform, the IT-solution enabling the CoO ownership transfers. They will need to implement the necessary processes for sending and receiving data packages, in the form of XML files, to and from other System Participants via their account.

ERGaR provides national registries who want to become System Participants with the User Manual and the Application Form on the registration procedure. The application procedure includes three steps:

Please contact us for further information and support. You may request the application forms from the ERGaR secretariat.

To be admitted to the ERGaR CoO Scheme, a national registry must: