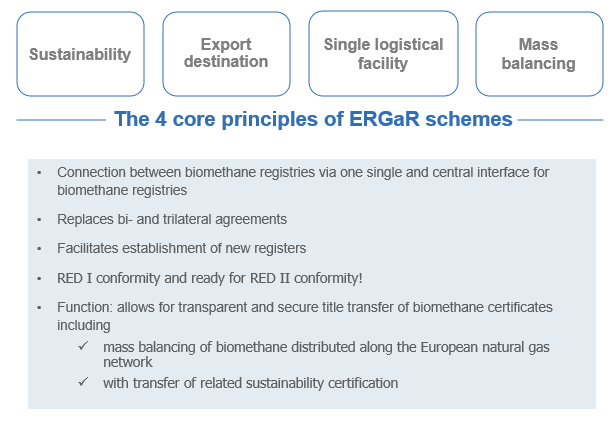 ERGaR Tracks the Chain of Custody of Renewable Gas

Within the ERGaR RED MB scheme, mass balancing is the methodology applied to trace virtually the chain of custody of renewable gas distributed along the gas network of Europe. The operation of a mass balance system enables monetising the intrinsic, green value of exported renewable gas without explicitly tracking the physical cross-border gas flow.

The definition of the origin, quality and quantity of renewable gases had not been requested by European legislation before the recast of the Renewable Energy Directive (RED II, 2018/2001/EU) in detail, which extends the purpose of GOs for consumer disclosure for gas including hydrogen and heating/cooling. According to Article 19 of RED II, only certificates issued under the supervision of governments or of government designated bodies can be called GOs.